Skip to content
View cart “Blue Grama” has been added to your cart.

A thicket-forming shrub grows to 10-12’ in height and blooms in late spring. Similar to Lead Plant but taller. Attracts bees and butterflies. Full to partial sun, medium-wet to medium-dry soil.

6-15’, wet-med to med-dry, May, June, FS PS, purple, H B L, silver spotted skipper, usually no taller than 10′, lacy foliage with purple flowers in spring, be sure to look at these blooms with a magnifier

False Indigo has small, uniform leaves that measure out from the stem, airily filling out the top third of the plant.  In summer, tiny aubergine-colored flowers open from tall spires, sending bright yellow and orange stamens from individual blossoms and dusting the spikes with golden pollen.  This thicket-forming shrub is similar in appearance to Lead Plant, but is much taller and prefers to keep its roots moist.  Despite the close resemblance and family ties, False Indigo gets its common name because it produces indigo pigment – but not in large enough quantities for commercial use.

An adaptable plant, Amorpha fruticosa is often found at the water’s edge and tolerates dry spells as well as occasional flooding.  It prefers sunny locations, but appreciates partial shade, particularly if the soil is on the dry side.  Depending on the site, plants can grow up to 12 feet tall and will often spread by self seeding and suckers.

A vigorous plant throughout its range, this species can be invasive when planted outside of its historic regions.  We are waiting for an updated BONAP map for this species. It is not native in Washington and much of the Pacific Northwest, Michigan, Maine, New Hampshire, Vermont, Massachusetts, Connecticut, and Rhode Island. It is a prohibited species in Maine and Connecticut and is considered an invasive species in Connecticut and Washington.

False Indigo is a host plant for Silver-Spotted Skippers, Southern Dogfaces, and Black-Spotted Prominents.  It also attracts Andrenid bees, which are specialist pollinators for Amorpha species. 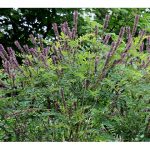