There are many varieties of Rudbeckia – I’ve yet to meet one that I didn’t like! Sturdy perennials with cheerful flowers, most are well-adapted to Oklahoma’s challenging climate.

Choosing a favorite flower is like playing favorites with your grandchildren. But if I had to make a list, Rudbeckia triloba would be on it.

Carefree, bushy plants bloom in August or September in an explosion of small, bright yellow flowers. It’s fabulous as a bouquet filler. Native from New England to Minnesota south to Georgia & Oklahoma. Biennial or short-lived perennial, often self-seeds. Heat and drought tolerant, low maintenance, attracts bees & butterflies. The Latin name triloba refers to the leaves at the base of the plant, which are three-lobed.

Named after a well-known nurseryman who discovered this cultivar growing in a wild patch of prairie next to railroad tracks in southern Illinois.

I have the regular Henry Eilers that grow 3-5’ tall, and a “dwarf” version– not a big difference. Add a note to your order if you prefer one or the other.

This giant of a flower will catch the eye of anyone within sight of it! The large, blue-green leaves at the base of the plant look a bit like cabbage leaves, earning it the nickname of Cabbage Leaf Coneflower.  The flower stalks will reach 4 or 5 feet in height, and are topped by deep yellow flowers with a brown center cone. A perennial native to Oklahoma, it prefers full sun and medium-dry soil. Butterflies and bees appreciate its blooms in summer, and birds will enjoy feeding on the seeds in the fall. Its roots are rhizomatous, so it will form colonies and slowly spread; it starts off the first year with just a few flower stalks, then increases year by year. An absolute favorite on our block. 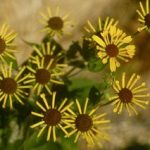